A millennial history that lives below the ground in Naples, a journey to discover the close bond of faith between the city and its patron saint, San Gennaro.

Naples is one of the clearest examples of cities where history can be traced through its "layers".

This coexistence of eras has acquired increasing value in the city's economy, through the integration of archaeological finds in contemporary public works, such as the Municipio station on Metro Line 1.

Have you been to the Catacombs of San Gennaro?

Your ticket is valid 12 months to visit San Gaudioso. 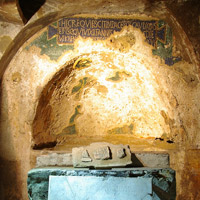 The underground world is the place of our ancestors, not only in terms of archaeological remains.

In Naples, under the ground is primarily where you bury your loved ones and encounter their souls. Just as the remains are exposed in the city, their souls are also inhabitants in all respects, because the relationship with the afterlife is part of everyday life.

Dialogue with the dead has always accompanied the life of the city, through idioms, devotions and ancient rituals.

Likewise, the saints are always present in the daily life of Neapolitans, whether in intercessions for important graces or for minor requests. Small sacred images are still faithfully kept in wallets, while the votive aediculae scattered among the alleys are like little altars.

«You get an impression of transcendence as a liberation from the earthly burden: matter was and will become dust.»

Holger Milkau, dean of the Evangelical Lutheran Church in Italy 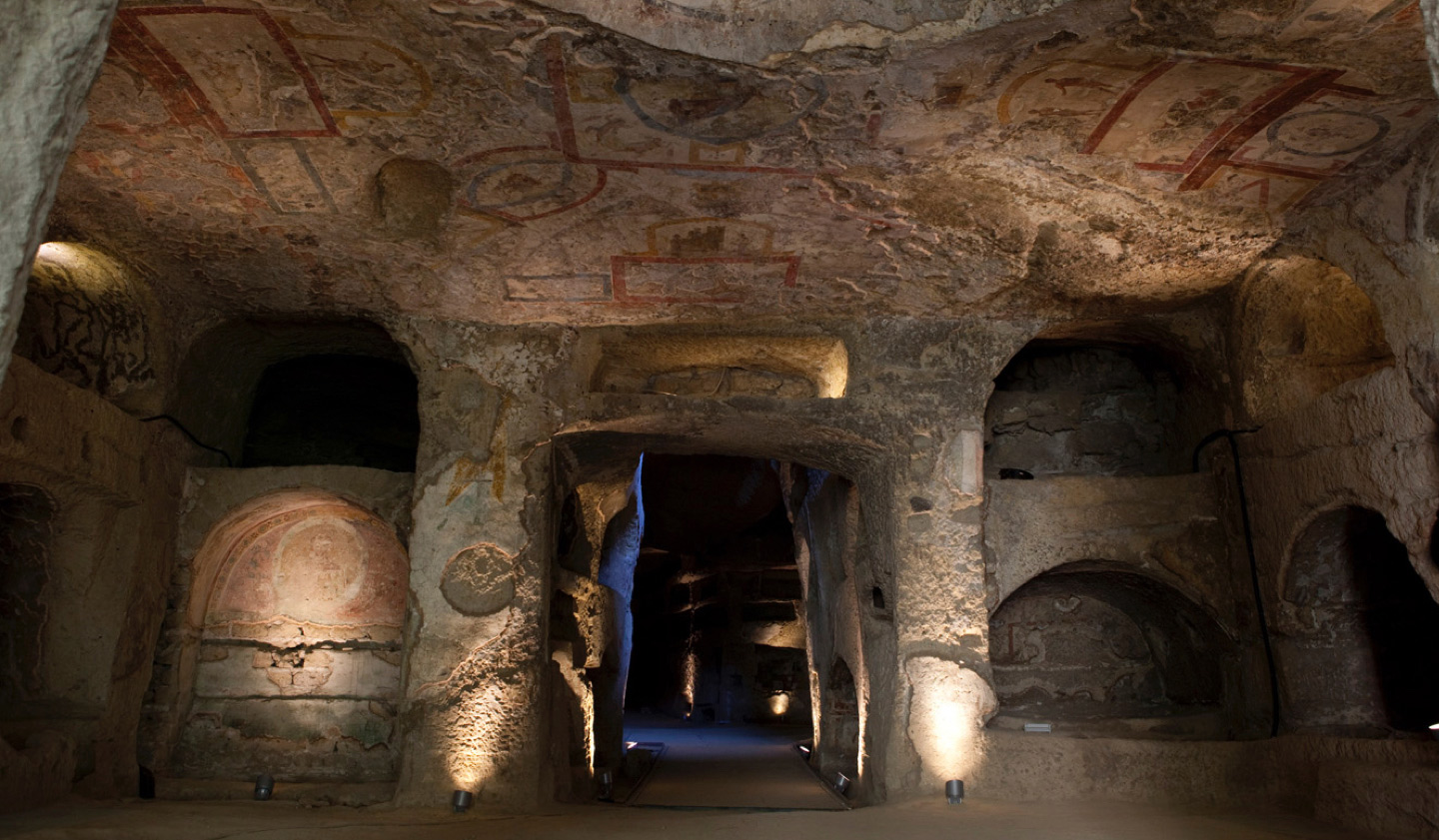 A hundred steps to travel in time

A few steps are all it takes to descend to the roots of Naples' relationship with faith.

The Catacombs of San Gennaro are arrange on two levels that are not superimposed, both characterised by much larger spaces than the more famous Roman catacombs. This is due to the workability and strength of the tuff.

The original nucleus of the Catacombs of San Gennaro dates back to the 2nd century AD. It was probably the tomb of a noble family, who then provided spaces for the Christian community.

The expansion began in the 4th century AD following the deposition of the remains of St. Agrippinus, the first patron of Naples, to the underground basilica dedicated to him. It consists of a single nave dug out of the tuff, which still preserves a bishop's chair carved into the rock and the altar with an opening, in which the faithful could see and touch the saint's tomb.

In the lower catacomb

Even today, Mass is celebrated in the underground Basilica of Sant'Agrippino. 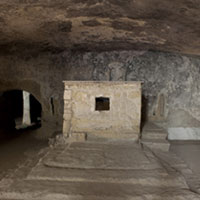 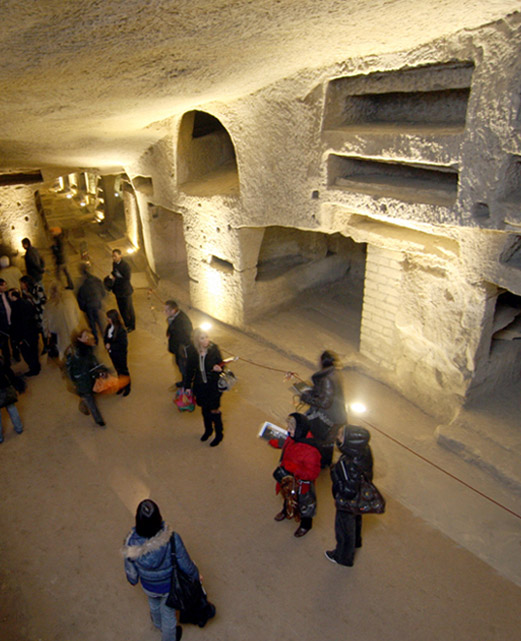 14,000years since the first appearance of Neapolitan Yellow Tuff

First appearance: its accessibility and easy extraction already enabled its use in the first Greek settlements.

The lower catacomb, a dense grid carved into the tuff stone

The lower catacomb extends around the Basilica of Sant'Agrippino, following a reticulated structure. The vast spaces and the regularity of its shapes silently welcome visitors into a timeless place.

The imposing lower vestibule, with ceilings measuring up to 6 metres high, houses a large baptismal font commissioned by Bishop Paul II, who took refuge in the Catacombs of San Gennaro in the eighth century during iconoclastic struggles. 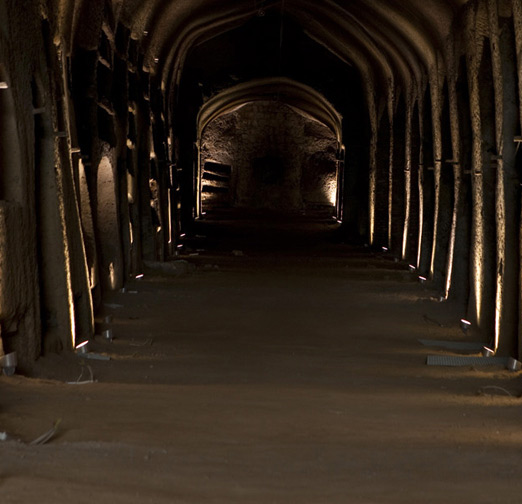 15°C is the lowest temperature in the catacombs

The temperature in the catacombs ranges from 15 to 22 degrees. To fully enjoy the tour, wear comfortable shoes and a sweater, even in the warmest times of the year.

The lighting of the site: Lux in tenebris

Light and shadow define, enhance, hide and reveal the shapes of the archaeological site. 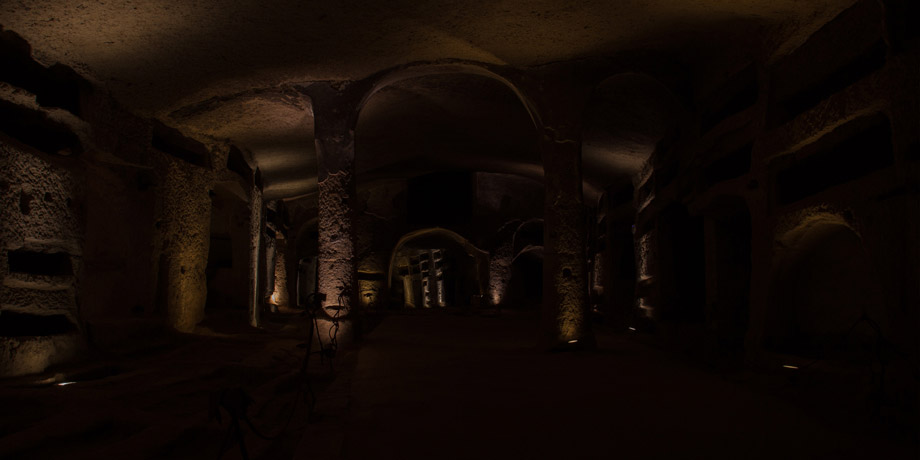 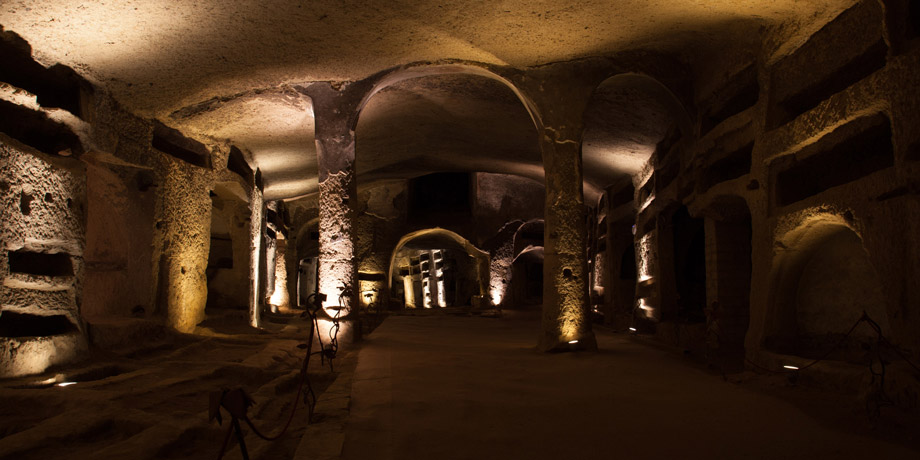 Created in 2009 by Officina dei Talenti, a cooperative of young people from Rione Sanità, using LED technology to preserve the vast heritage of paintings and mosaics.

The lights used do not expose the works to infrared or ultraviolet radiation.

The upper catacomb, the burial place of the bishops

The upper catacomb originates from an ancient tomb, dating from the third century AD, which preserves some of the earliest Christian paintings in southern Italy.

Its expansion began with the moving of San Gennaro's remains in the fifth century. The presence of the martyr turned the upper catacomb into a pilgrimage site and coveted place for burial.

Two examples of the expansion of the Catacomb are the Crypt of the Bishops, where the city's bishops are buried, and the majestic basilica adjecta, an underground basilica with three naves, built after the transfer of San Gennaro's remains. 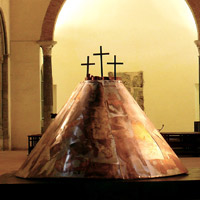 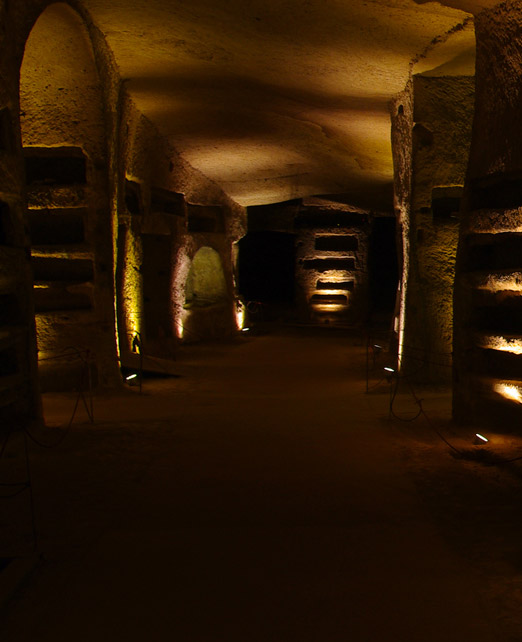 3,000burials have been counted in the archaeological site

This is a rough estimate, since not all the areas have yet been unearthed.

The tomb of San Gennaro

The tomb of San Gennaro was identified through the study of a 9th/10th-century homily and a passage from the Chronicon of the bishops of Naples.

From an eighth-century homily and a passage from the Chronicon of the bishops of Naples, it was discovered that the tomb was in a cubiculum, identified as the one below the basilica of the bishops.

Starting with the tomb, changes began to be made to the level above it, with the creation of an area reserved for the burial of bishops and of basilicas, larger spaces than the other chapels reserved for the common deceased. 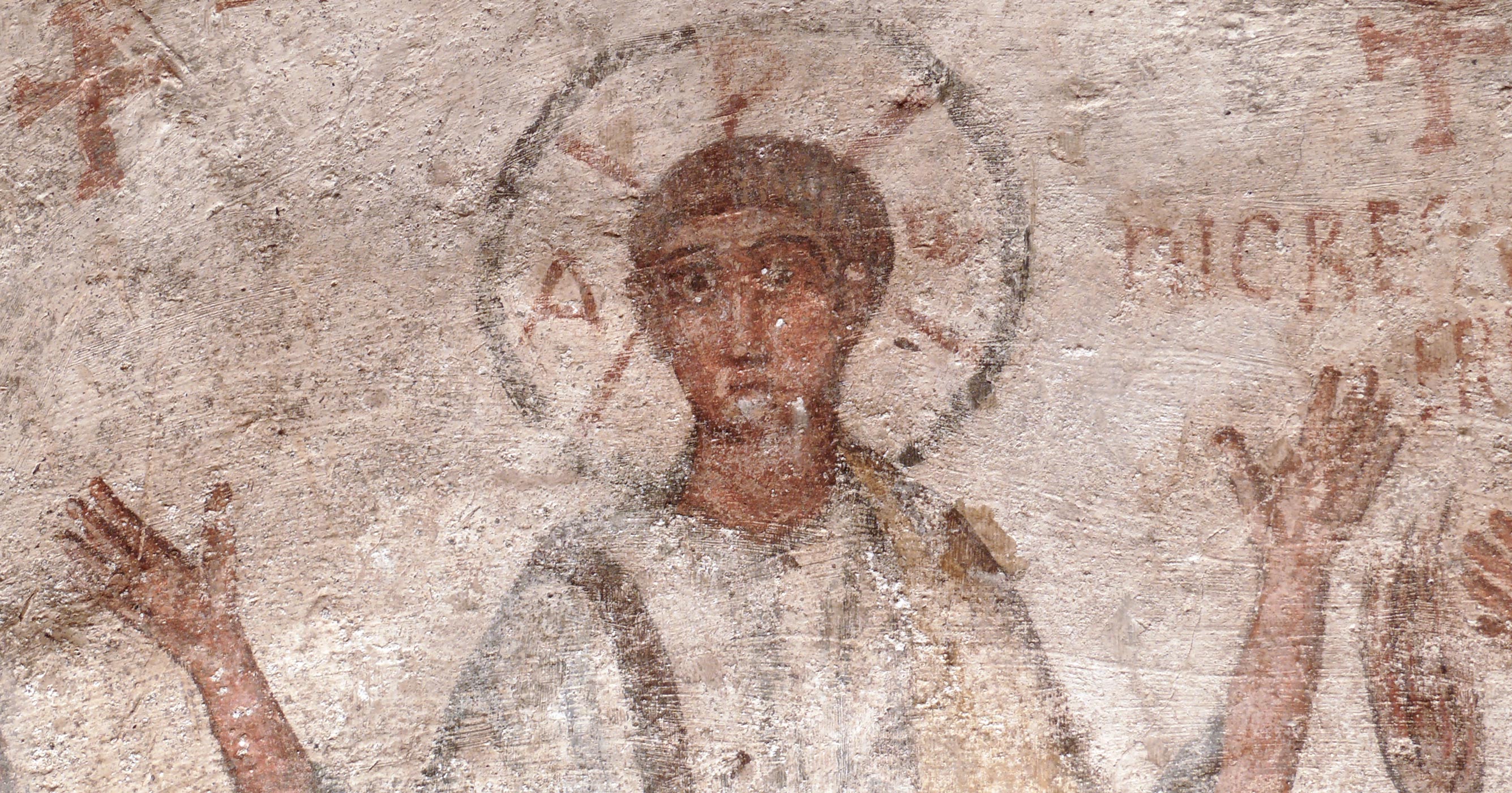 Among all the saints, San Gennaro, the patron saint of Naples, occupies a special place.

San Gennaro is affectionately called Faccia Gialla (Yellow Face) due to the colour of the face of the statue that is carried in procession.

The journeys of San Gennaro

Before reaching their final "home" in Naples Cathedral, the remains of San Gennaro were moved several times to various parts of Campania.

San Gennaro' origins are still uncertain, but he was probably born in 272 AD and was bishop of Benevento. He was arrested in the 4th century for professing the Christian faith and beheaded in Pozzuoli in 305 AD. The martyr's blood was preserved in two phials and his remains were buried in Agro Marciano.

In the 5th century he was brought to Naples by the Bishop John I and buried in the catacombs, which became a pilgrimage site.

The remains were stolen by the Lombard prince Sico I in 831 AD and brought to Benevento. They were later moved to the sanctuary of Montevergine, where they remained almost forgotten for over two centuries. After many years of negotiations with the monks of Montevergine, the bones were returned to the city of Naples in 1497.

The 52 patrons of Naples

Despite being the city's most loved and popularly acclaimed patron, San Gennaro is not the only one. Naples has 52 patrons, including the Assumption of Marythe first patron, St. Aspren, the first bishop of the city, St. Thomas Aquinas, St. Francis of Paola and St. Francis of Assisi, St. Severus, St. Patricia, St. Vincent Ferrer and others.

The only Italian city that comes close to having such a large number of patrons is Venice, which has 25.

The 51 silver busts depicting the patrons of Naples are preserved in the Cathedral, and they all are carried in procession on the Saturday before the first Sunday in May, to accompany San Gennaro.

Invoked to stop plagues and eruptions

San Gennaro became the patron saint of Naples in 472 AD. 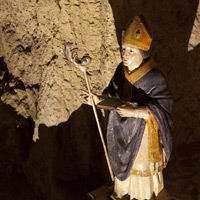 25 million: devotees around the world

21,612: votive offerings, items of jewelry and necklaces preserved in the Museum of the Treasure of San Gennaro

13 solid gold chain meshes, 700 diamonds, 276 rubies and 92 emeralds: the Necklace of San Gennaro is one of the most precious pieces of jewellery in the world

1389: first documented liquefaction of the blood

3: the blood liquefies three times a year, on the Saturday before the first Sunday in May, on 19 September and on 16 December

1631: his relics were carried in procession and halted the flow of lava from Vesuvius

An experience accessible to all

The Catacombs of San Gennaro are the only site of their kind in the world that is fully accessible.

In 2009 a decision was made, together with the Tutti a Scuola association, to remove all the architectural barriers and to create walkways and ramps, so that the site could be accessible to everyone. In association with SAAD (University Service for activities by students with disabilities) of the Suor Orsola Benincasa University and the Iron Angels social cooperative, the Napoli tra le Mani ("Naples in your Hands") project was launched to create a route for blind and visually impaired visitors, through tactile exploration with metal plates that provide descriptive details of the place.

The tactile tour is available by reservation only.

The entrance for the disabled is in Vicoletto S. Gennaro dei Poveri, 22 (open by appointment).

Society through the tombs

From the characteristics of the tombs, we can gain an insight into the society of the time, particularly with regard to the social status of the deceased.

There were different types of burial: the simplest type were dug in the ground or along the walls and peripheral corridors of the ambulatory. The tombs of the most wealthy, the arcosolia, were arched in shape.

The decorations of the tombs served to underline the importance of families, and could feature frescos or mosaics.

The fresco can be dated to the start of the 6th century and depicts the family buried inside the arcosolium. The painting is particularly interesting, due to the presence of three layers of painted plaster, which give the impression of the fresco being repainted after the death of each individual. The richness of the garments and ornaments emphasises the high social status of the family.

In addition to the unique architecture, the site is characterised by the presence of a rich pictorial and mosaic heritage. 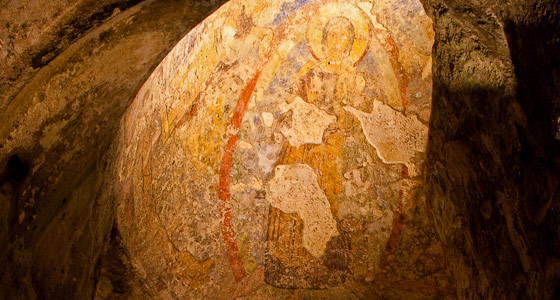 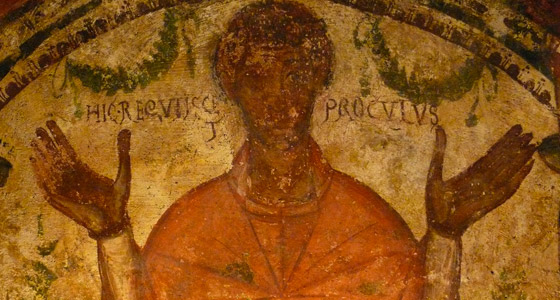 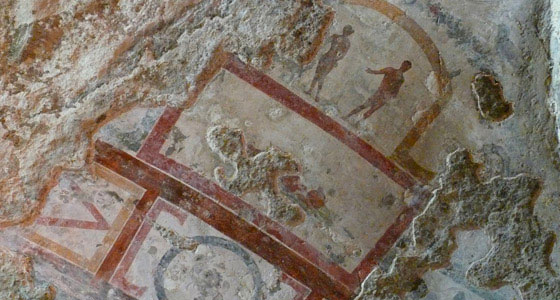 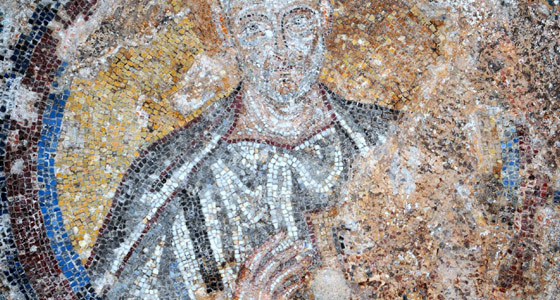 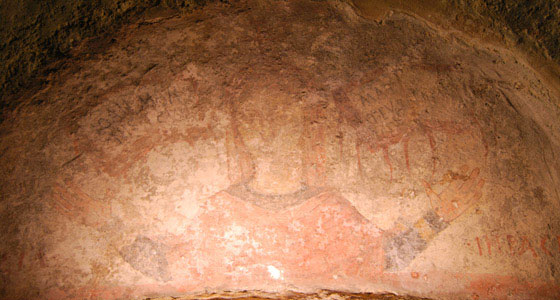 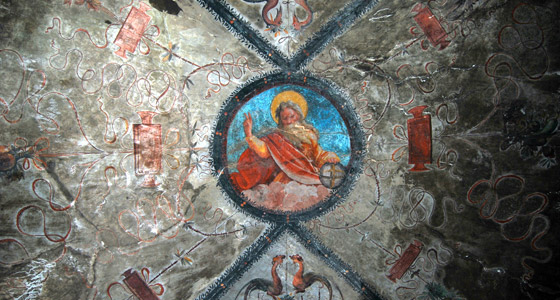 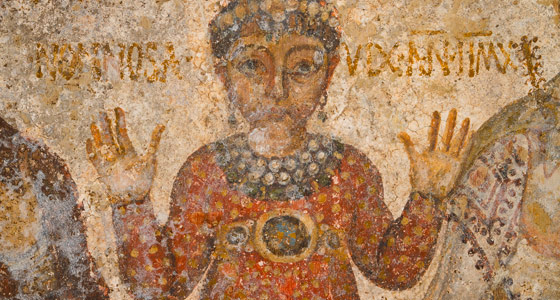 One of the most striking areas is the vestibule of the upper catacomb, which was decorated at the beginning of the 3rd century in the so-called Pompeiian style and conserves the earliest Christian paintings in southern Italy.

Perhaps the most precious place is the Crypt of the Bishops, which preserves valuable 5th-century mosaics, including one portraying the bishop of Carthage, St. Quodvultdeus.

The restoration and adoption campaign

Restoring and enhancing the artistic and monumental heritage is an absolute priority. They are hallmarks of a local area: unique documents and books that are open to everyone.

In recent years, there has been a movement to launch a "new beginning" with a campaign for the adoption of restorations in Rione Sanità named Teniamo in Vita il Passato ("Keep The Past Alive"), which is aimed at all those people willing to put their own resources at the service of the common good.

The campaign started from the catacombs of the patron saint, with the restoration of the frescoes of San Gennaro, Bitalia and Cerula.

The Catacombs of San Gennaro preserve some extremely interesting and unique frescoes, such as those of Bitalia and Cerula (5th to 6th century AD), which have reappeared from the past in all their beauty. These two great women are depicted with Gospel codices, as if to indicate the intimacy of a relationship with Christ's message that gives the deceased a strong, charismatic personality.

To first enthusiastic response to the restoration project came from the Attorney General of the Republic, Vincenzo Galgano, followed by the Group of Young Entrepreneurs of the Industrial Union of Naples, the ACEN Youth Group, theUnion of Young Chartered Accountants of Naples (UGDC), The Art Raising Association and Di Fiore Photographers, Poste Italiane S.p.A., Parmacotto. 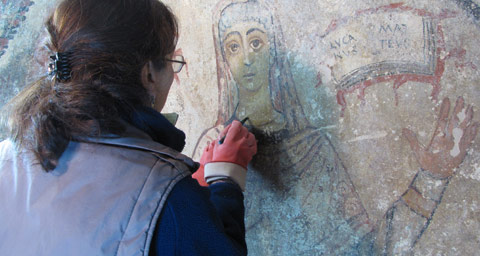 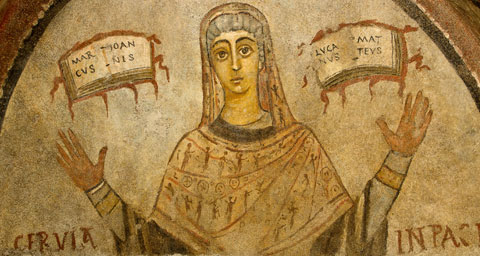 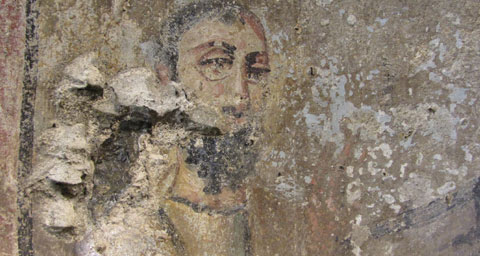 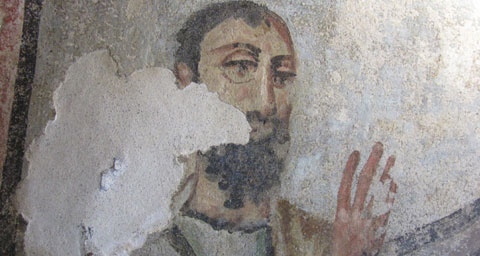 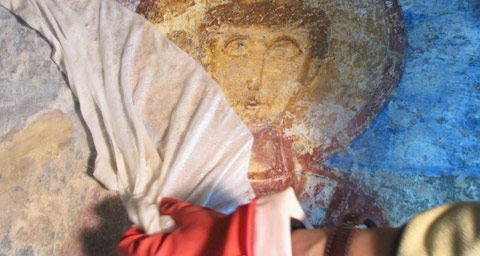 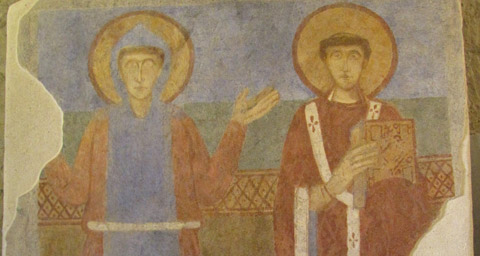 The entrance is next to the Basilica del Buon Consiglio,
Via Capodimonte, 13.

Guided tour of the Catacombs of San Gennaro

Tours
Everyday from 10 am