The symbolic site of Naples' devotion towards the dead, a devotion that is sometimes mingled with superstition and merges with everyday life.

In Naples, traditional devotion is combined with a cult in which a series of rituals and expressions are interlaced.

The way faith is lived in Naples reveals a bond with death and with sanctity that is "present" and real.

Tangible examples of this daily relationship with the afterlife are provided by the now abandoned cult of the anime pezzentelle, which has remained very much alive in the city's memory.

Until a few years ago, the custom of adopting one of the skulls in the ossuary was widespread. The faithful would take care of the adopted soul, cleaning its skull and offering prayers to alleviate its pain, in exchange for a grace.

Visit the Catacombs, the District and the Fontanelle ossuary with us. 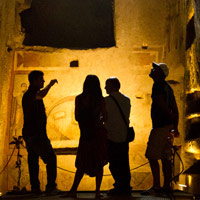 Rione Sanità through the necropolis and activity

The former Greek-Roman necropolis is now a lively district, characterised by its checkered and unusual history.

Rione Sanità is located in a valley which joins with Valle dei Vergini, Valle della Sanità and Valle delle Fontane, and is surrounded by the Miradois, Capodimonte, Scudillo, Stella and Materdei hills. The area has undergone many changes over the centuries, both due to the flow of the Lave dei Vergini, which deposited debris from the hills in the valley, and to the urbanisation that has affected the area since the 16th century.

There's a wealth of amazing art and culture. 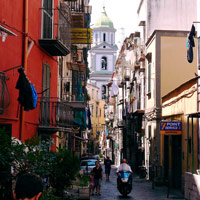 The composition of the surrounding hills and the healthiness of the area, which was once pristine, encouraged the development of vast burial complexes since the Greek era. No remains of private buildings or public monuments have ever been found to the north of the walls of Naples, but many tombs dating back to the 3rd-2nd century BC have been found, and some even dating back to the 4th century BC.

The excavation of the cemetery areas was facilitated by the Neapolitan yellow tuff, found along the sides of the hills, which was extracted for the building and construction of the underground tombs. 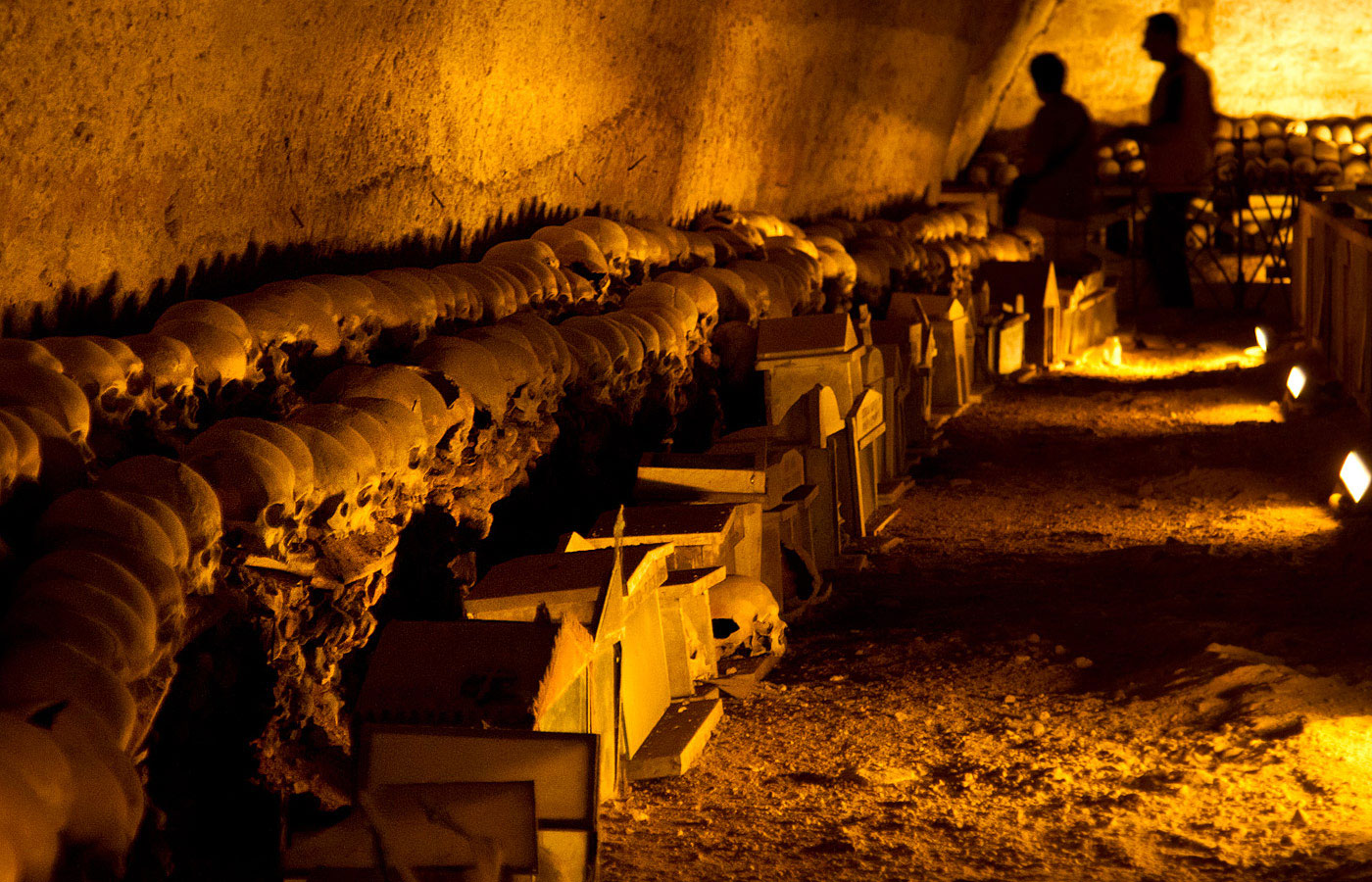 The hypogea of Rione Sanità

The hypogea of Via Vergini, Vico Traetta, Via Cristallini and Via Santa Maria Antesaecula, located at depths of up to more than 11 metres, are a testament to the origins of the district. The hypogea date back to a period ranging from the 4th to the 3rd century BC, shown by their structural characteristics and decorations.

The Fontanelle ossuary is much more recent than the Greek-Roman and Palaeo-Christian cemetery, but no less fascinating.

A short walk through the district takes us there. The site is anancient tuff quarry carved into the Materdei Hill, known as Fontanelle (literally little fountains), due to the streams of water that gushed from the surrounding hills. 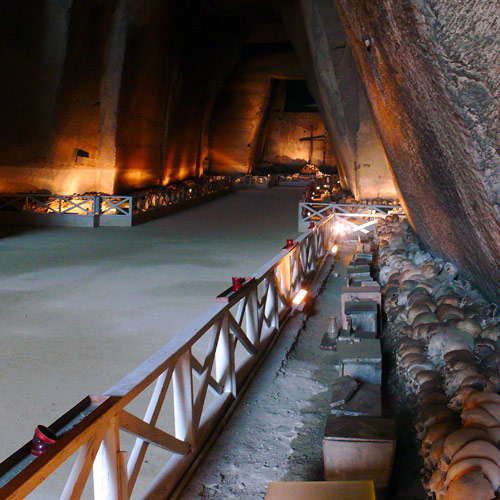 Is the total surface in square metres of the ossuary, that stands at an altitude of 74 m above sea level and is dug into a hill
108 m in height.
The average height of the ceiling in the chambers
is around 15 m.

For at least four centuries, the cemetery site has preserved the remains of those who could not afford a burial and the victims of the epidemics that often struck Naples.

During the Plague of 1656, according to some sources, the quarry received 250 thousand corpses from a population of 400 thousand, while others say that the number of victims even reached 300 thousand. Due to the large number of remains in the ossuary, there was already a first initiative to reorganise the bones at the end of the eighteenth century.

The origin of the ossuary

The birth of the Fontanelle cemetery dates back to the 17th century, when in Naples was struck by a succession of events:

In 1837, after an outbreak of cholera, the Health Board ordered the transfer of bodies previously buried in churches and consecrated ground of confraternities to the Fontanelle ossuary.

The work of reorganisation

The cemetery remained abandoned until 1872, when the canon, Don Gaetano Barbati, put the anonymous bones in order with the help of some local women.

At the end of the nineteenth century, a pious work was established for the repose of souls and each Monday, the day of the Moon, which has always been dedicated to the dead, the site was open for worship.

The statue of the Monacone

The statue in the ossuary is headless, but you can see its face in his Basilica. 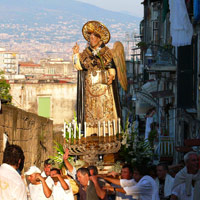 The legend of the dumpling

Of the thousands of anonymous bones arranged by Don Barbati, the only two skeletons unearthed that were not anonymous were those of Count Filippo Carafa of Cerreto and his wife Donna Margherita Petrucci, in coffins covered with glass. The body of Donna Margherita is mummified and the mouth is wide open, which led to the rumour that she choked to death on a dumpling.

The couple belonged to the Carafa family, who were lovers of Gothic literature and Edgar Allan Poe. For this reason, they boasted of being the owners of the cemetery.

In July 1969, Cardinal Corrado Ursi had the ossuary closed with a decree from the Ecclesiastical Court: he was concerned by the signs of fetishism connected with the cult of the "anime pezzentelle"(derelict souls), considered as a superstition contrary to the Catholic doctrine of the Second Vatican Council. 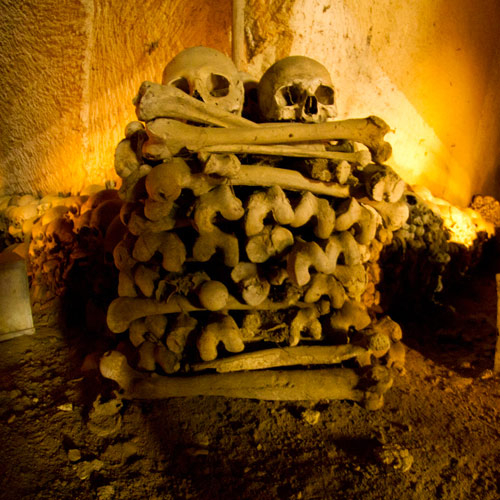 Are the remains preserved here. However, more bones may still lie buried beneath the present-day floor level, neatly arranged at the time by specialised undertakers.

The Fontanelle cemetery remained closed for many years. It was then made safe and reorganised after 2002, and finally reopened in 2010, following a peaceful occupation by the inhabitants of the district.

The areas of the ossuary

Just as the various aisles house different types of remains, depending on their origin, the Fontanelle cemetery is also divided into different areas.

The Court contains a crucifix on a bone base and, according to tradition, it was the place where the guappi of La Sanità took their oaths. Theossuary is a collection of bones, in the centre of which stood the statue of the Risen Christ.

The last cave houses the scolatoi, where corpses were placed to drain their fluids. In this part of the ossuary, the foot holes used by the quarrymen to climb down into the cavity to extract and dress the tuff can still be seen.

The cult of the "anime pezzentelle" (derelict souls)

According to tradition, Neapolitan worshippers would adopt skulls to take care of in return for graces.

The cult of the anime pezzentelle, which was particularly strong during both of the post-war periods, followed a precise ritual: the chosen skull was cleaned and polished, placed on an embroidered handkerchief and decorated with candles and flowers, and a rosary was then placed around itsneck .

The handkerchief was later replaced by a pillow adorned with embroidery and lace. This would be followed by theappearance of the chosen soul in a dream, where it would ask for prayers and intercession to alleviate its sufferings in Purgatory, while the faithful would request a grace in return or numbers to play on the lottery.

If the grace was not granted, or if the numbers received in the dream did not come up on the Saturday, the faithful would abandon the skull and chose another capuzzella.

If, however, the graces were granted, the skull would be honoured with a more dignified burial: a box, a case or a cabinet, depending on the possibilities of the person that adopted it.

The skulls were never covered with tombstones, because they had to be left free to appear in dreams, as the only means of communication between the living and the dead.

The celebrities of the ossuary

The personifications of the anime pezzentelle originated from dreams, and have become part of the imagination of a city that has never resigned itself to the condemnation of death.

The prayers to the souls would include the phrase 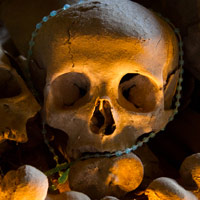 The Captain is the most famous capuzzella in the ossuary: various legends are associated with it and it is revered because it is represents the Head that the people of Naples have never had.

Another famous skull is that of Concetta, whose particular feature is its shininess: whereas all other skulls are covered with dust, hers is always polished, probably because it is better at retaining the moisture of the underground site, interpreted as the perspiration of the souls in Purgatory. Concetta was generally an object of female devotion, in order to find a husband.

Among the numerous skulls revered, Brother Pasquale was the capuzzella that gave lottery numbers in dreams, la Capa Rossa (the Red Head) would appear in a dream as a postman with red hair.

Visit the ossuary with the help of our guides during the tour of the Miglio Sacro.

Guided tours
Every Sunday, departure at 9:00 am from the Basilica del Buon Consiglio
(Via Capodimonte, 13)